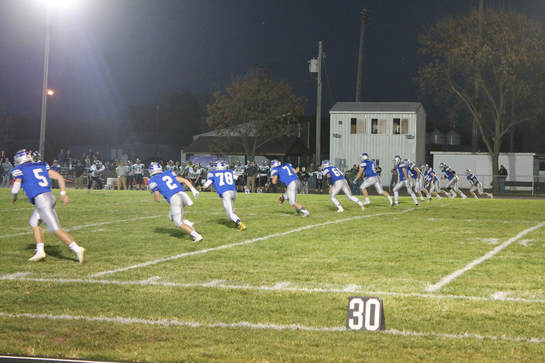 AND WE’RE OFF: Senior Abiah Plastow of Ethan begins the McCook Central/Montrose game with the kickoff Oct. 19. The Bridgewater-Emery/Ethan Seahawks defeated the Cougars 42-0, leading them into another victory over the Winner Warriors Oct. 26 with a final score of 18-8.
What a cold, chilly night for playing football! Nevertheless, the Seahawks managed to pull off another win. The Winner Warriors hosted the Bridgewater-Emery/Ethan Seahawks Oct. 26. The Warriors have won the past two 11B state championships but on Friday night, the Seahawks managed to put an end to the Warrior’s chance at renewing the state title and gave themselves a shot at this year’s state title.

“It felt great to get payback from last year and to come off the field as the better team. We move on to Sioux Valley Friday, Nov. 3. We have faced them once this season but we did not play well against them. For us to come off the field with a win we must do the little things right,” linebacker/offensive guard Bradlee Schultz said.

The first half of the game started out with a kick from the Seahawks. The Warriors managed to continuously gain a first down until the Seahawks came to the mindset that they had to stop them if they wanted to win. Dustin Weber and ran the ball in for a 67-yard touchdown along with a pass to Mason Potter, tight end, from quarterback Brady Hawkins to score another touchdown. The Warriors also managed to score a touchdown with a two-point conversion. However, that did not stop Jamin Arend from returning the ball 26 yards after the kickoff. The Seahawks managed to hold the Warriors to 36 carries for 203 yards while the Seahawks rushed 111 yards. To end the first half, the Seahawks were ahead by four points with a score of 12-8.

The Warriors kicked the ball to start and Hawkins with a return of 45 yards. The Seahawks really stepped up their defense and shut down the Warriors discontinuing their continuous first downs. Running back Jamin Arend ran in for a touchdown of three yards while Potter managed to obtain the ball with an interception. The Warriors didn’t allow the Seahawks to gain as many yards in the second half, but they still managed to rack up 84 yards. However, the Warriors still managed to rush a total of 22 yards for 14 carries.

“I definitely think that our defense challenged Winner more when moving the ball throughout the second half. We came out and overall played better,” Duot Vansickle said.

The final score for the Seahawk win against the Warriors was 18-8.
“It is definitely going to be tough with the weather the way it is and facing Sioux Valley, the number one seed in 11B, but if we go out knowing what needs to be done with our heads in the game, we can pull off a win,” Arend said.

The Seahawks will face Sioux Valley again Nov. 3 for the semi-final game to determine who will advance to the 11B football championship at the dome in Vermillion Nov. 10.