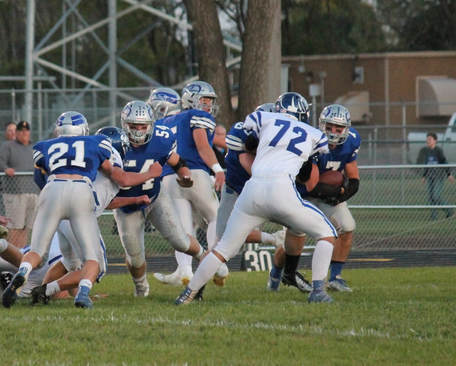 ​“It felt great to defeat the A school, Canton, and move in a positive direction in our season,” offensive guard/linebacker Bradlee Schultz said.

The game started out with a kick from quarterback Brady Hawkins. The C-hawks scored their first and only touchdown off the kick along with a point after the touchdown (P.A.T.) Soon after, Jamin Arend rushed 60 yards for the Seahawks’ first touchdown and Brady Hawkins added a P.A.T. The Seahawks managed to hold the C-hawks to 23 rushing yards with eight carries and one touchdown, and the Seahawks racked up 91 rushing yards with eight carries and one touchdown during the first quarter. The first quarter left the C-Hawks and Seahawks tied.

“I really liked how after they returned the opening kick and scored, we did not give up. We came back strong and shut them out,” running back Jamin Arend said.

In the fourth quarter, the Seahawks rushed 59 yards for 11 carries. Halfway through, the Seahawks’ JV team took over for the varsity. They went in with confidence and held off the C-Hawks from scoring a touchdown. The C-Hawks rounded up negative seven yards for nine rushes.

“I really enjoyed how we came together and played as a team. We kept our pad level low which allowed us to work harder and move quicker. We were able to get into or work around Canton’s defense and keep moving the ball down the field which made it a very fun game to play,” Bradlee Schultz said.