Seahawks Come Out with State Runner-Up 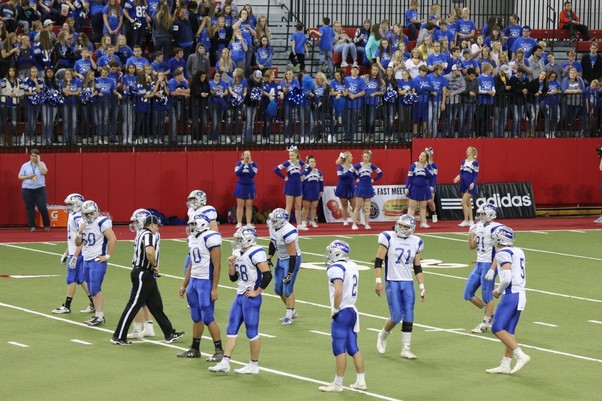 As you know, the Seahawks had taken the victory over the fourth seed, Winner, and the first seed, Sioux Valley, to advance to the dome. The Seahawks went into playoffs and played their hearts out, playing as if it was their last game every time. The Seahawks had some tough teams to play considering they faced Sioux Valley earlier in the season and lost. As you know, the Seahawks managed to come out of the playoffs on top with the drive and heart they had for each game. They knew the season could be over if they didn't go in with a good mindset but they never once doubted their skill which allowed them to advance to the class 11B championship.

"The win over Sioux Valley definitely gave us a lot of momentum going into the championship game. Although it did not carry over as much as we wanted it to, we still worked hard to make it this far. I am still proud of my teammates and all we have accomplished this year," running back Jamin Arend said.

To start the state game off, the kicker Abiah Plastow kicked off for the Seahawks for the Chargers to receive and return. The Chargers managed to gain a lot of yards on the Seahawks but the Seahawks still stuck with the Chargers, putting up a fight. The Chargers scored a touchdown without an extra point. Quarterback Brady Hawkins incepted a pass but did not return it.

For the second quarter, the Chargers came out with strong defense and offense, scoring another touchdown. It was still difficult for the Seahawks to rush the ball and stop the ball but they managed to keep pushing. The Seahawks were not willing to give up.

The score going into halftime was 12-0.

"The first half of the game we came out without emotion and energy. It was hot in there and we were overheating being we were not used to the warm atmosphere from playing outside in the cold in previous games. We knew what we needed to do going into halftime and we wanted to come out differently. The second half, we came out wanting to play harder and work for our goal," defensive tackle/offensive tackle Duot VanSickle said.

During the fourth quarter, the Seahawks allowed the Chargers to score one touchdown at first. For the Seahawks, Arend rushed in the touchdown for two yards. Hawkins threw some long, complete passes to his teammates which helped a lot. The Seahawks had to put a stop to the chargers to have a shot a catching up. As of now, the score consisted of the Seahawks with 12 and the Chargers with 20. The Seahawks needed to stop them from gaining a first down so they could have possession of the ball with less than three minutes to go. The Chargers blocked well for their running back and he managed to run it into the end zone and scoring a PAT (point after touchdown), making the score 27-12 to end the game.

Even though the Seahawks didn't pull off the win, they were still class 11B state runner-up. They played through lots of adversity with many players being hurt but, pulled through. They made it to the state championship. That doesn't come around very often but when it does, you make the most of it and so the Seahawks did.

"I am proud of the way we played throughout the season and overcoming adversity. We really showed how we could overcome anything, and I am so blessed to call these boys my brothers," center/defensive tackle Lucas Berg said.
The overall statistics for the game included Hawkins for five passes with 108 yards and two interceptions for 35 yards. Arend had 43 rushing yards for 11 carries while running back Dustin Weber had 18 yards for five carries. Defensive end/offensive tackle Carter Dye led the Seahawks in tackles with 16, followed by linebacker/guard Bradlee Schultz with 15 and Weber with ten