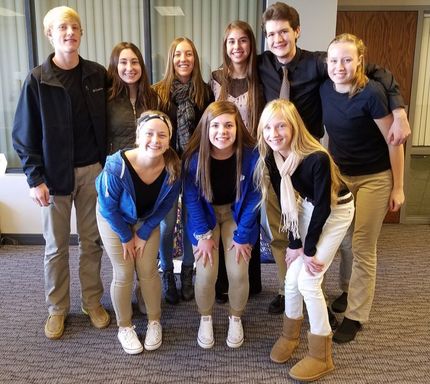 Steen’s piece “How Bad Do You Want It” is a motivational speech about wanting to be successful as bad as wanting to breathe when drowning. It is about believing in yourself, even if no one else does because all you need is self-confidence and a good attitude.

“I chose this piece because I wanted to inspire other people to become the best individual they could be. This piece is a very personal speech for me; I listened to it every day when I ran or lifted weights,” Steen said.

Hoffman’s piece “And Then There Were None” is a murder mystery which fits the story theme this year of mystery thriller. In the book, ten people stranded on an island, and one by one they were killed off. A poem revealed how the deaths would occur, but no one knew which life would be lost next. The ten people were the only living beings on the island, and therefore, the killer had to be one of them.

“I really enjoy my selection this year. I read the full novel last year in English class, and it was the best mystery story I have ever read, so I decided to pick out one of my favorite chapters and make it come to life,” Hoffman said.

Bailey and Schrank’s piece “Fight Over Fuchsia” is a dramatic duet piece about two girls who used to be friends but grew apart. They meet again at a bargain sale and proceed to fight over a blouse but then try and figure things out. Both Cara Sue and Shirley Ann think they did nothing wrong, which is the other reason their friendship ended. The two stubborn, dramatic girls continue to fight over who will apologize first. They finally come to an agreement of it being a stupid fight…but do they?

Weeldreyer’s piece “For Whom the Bell, Like Tolls” is a humorous piece about a college girl who goes to talk to her college professor about increasing her grade. The problem is that she doesn’t want to do the work to increase her grade.

The readers theater team’s piece “7 Reasons You Should Have Stayed Home Sick” is a humorous readers theater piece that talks about seven reasons why students should stay home from school.

The Bridgewater-Emery team had two students advance to state and one alternate pair. Hoffman in storytelling and Steen in non-original oratory. The alternates were Bailey and Schrank in the duet category.

“Advancing to state after not making it for four years was a very emotional moment for me. It only further proves the point that I’m trying to make with my piece. If you believe in yourself, even if no one else does, you can achieve your dreams. I hope my piece will continue to inspire others as it did me,” Steen said.

The state oral interpretation competition will be held Dec. 1 and 2 in Aberdeen, South Dakota.