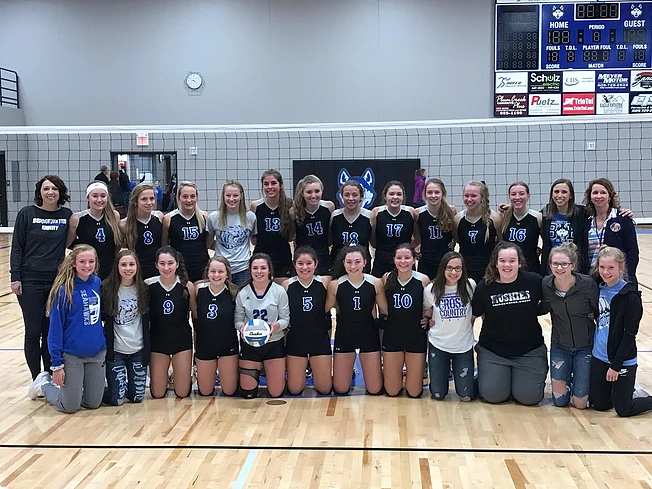 SWEET, SWEET VICTORY: Huskies volleyball team wins over Freeman Flyers in a five-set match Nov. 2 at 7:30 in Emery. The Huskies advanced to the Sweet 16 competition where they played the Warner Monarchs in Madison Nov. 7.
The Bridgewater-Emery Huskies faced the Freeman Flyers Nov. 2 for the second time this season. The first time the Huskies faced the Flyers, the Flyers came out on top of things and won the match in five sets, but that Thursday night was a different story. this time, the Huskies came out on top of the Flyers in five sets, advancing the Huskies to the sweet sixteen class B volleyball tournament.

The first set, the Huskies came out with some nerves. They set the ball up but needed to be more aggressive and play better together. The Huskies lost the first set with a score of 15-25.

The second set, the Huskies managed to set the ball up more and swing aggressively at the net. The passes were going where the setter wanted them which helped to get a few more kills than in the first set. The Huskies stepped up their game, knowing what needed to be done. The Huskies took the win for the second set 25-23.

During the third set, the Huskies struggled a little more than the second. They still managed to set the ball up and get a kill or two but did nothing that made the Flyers struggle on defense. The Huskies allowed the Flyers to go on a couple long runs where they would score five or six points at a time. The Huskies lost the third set 14-25.

The Huskies stepped out onto the court starting the fourth set knowing what they needed to do to pull off a win. If the Flyers won the fourth set, it would be over. To prevent this, the Huskies made a few changes to their game. They got their heads back in the game and put-forth continuous energy on the court. Everyone encouraged each other when someone made a mistake and kept the confidence level up. The Huskies took the win for the fourth set with a score of 25-14 taking the Flyers into a fifth set.

"I was excited when we headed into the fifth set with Freeman. The same occurrence happened when we played them in the regular season and lost, but this time, we got excited about a chance at redemption. I had confidence in my team the entire set," junior and middle hitter Sydney Hoffman said.

The fifth set in any volleyball game takes a lot of mental toughness but didn't seem to trouble the Huskies. They knew there was a chance that this could be their last set. They knew if they didn't go out and play the game they knew by being aggressive, working together and being smart with the ball their season could come to an end. The Huskies stepped out on the court thirsty for a victory, but the Flyers did, too. Putting up a hard fight, the Flyers fell short of the hometown Huskies. The final score for the victory in the fifth set was 15-13.

"This was an exciting match for all spectators and players. The game of volleyball can change so fast from one set to another and this was observed in this region match. I am so proud of our players as they fought until the very end. We believed in them and they proved it to themselves that they can win a big match," assistant coach Christena Schultz said.