Elsinore Has Never Been This Funny! 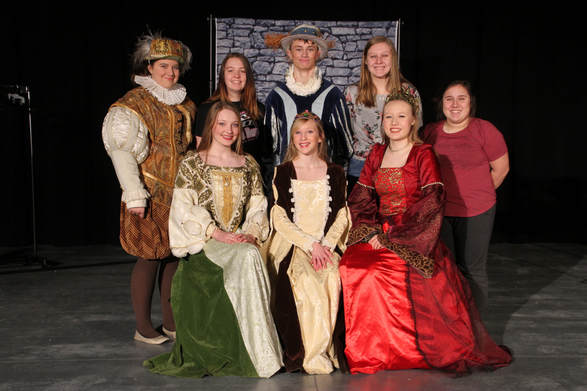 TO ACT OR NOT TO ACT: Bridgewater-Emery’s One Act cast performs Hamlette on the new stage in Emery Jan. 19 at 7:30 p.m. One Act cast and crew members include (back L-R) junior Sarah Schultz, senior Sharlene Glanzer, sophomore Zachary Weaver, senior Kori Heezen, junior Taylor Clark, (front L-R) sophomore Katrina Weber, sophomore Lindsey Weeldreyer and junior Mercedes Mesman.
William Shakespeare’s “Hamlet” is a classic tale of tragedy. It is a story of mystery, madness and betrayal. But why spend four hours watching the story unfold, when five actors can get the job done in just thirty minutes?

​“I think this one is funny, unique and a little bit strange,” actor Katrina Weber said.

Imagine, if you will, that “Hamlet” was not “Hamlet” at all, but “Hamlette” - a woman! In this twisted version of the tale, everything that could go wrong does go wrong. This includes deer-in-the-headlights line memorization issues, an actor not showing up for the performance and an actor faced with the dilemma of how to play two different characters on stage simultaneously.

“The students who are attracted to this activity tend to be smart and motivated. They tend to have a competitive spirit, and they want to be there at rehearsal. They're willing to work on the nit-picky details to make the performance better each time. I like working with them!” director Valerie Marsh said.

The drama was not contained to the stage, however, as the cast and crew had to adapt to multiple costume changes, characters, constantly changing sets, an abundance of props and a missing cast member of their own.

The troupe faced a complication early in production when an actor dropped out shortly after auditions. This was only a minor issue as sophomore Zachary Weaver stepped up to fill the role.

“I just came in and was like, wass up?” Weaver said.

The cast includes juniors Sarah Schultz and Mercedes Mesman, and sophomores Zachary Weaver, Lindsey Weeldreyer and Katrina Weber. The crew consists of seniors Sharlene Glanzer, Kori Heezen and Cassie Kerkhove and junior Taylor Clark. The play was directed by Valerie Marsh and was her fifth year directing the one-act play.

“At first, I was wary, because I didn’t connect with any character in the play. After we practiced a few times, I could see how much each person found a way to make their role a part of them and it was then that was the turning moment for me,” Schultz said.

The students involved in the one-act play had the opportunity to compete in the Region 1-B One-Act Play Festival at the Brandon Valley Performing Arts Center.

Bridgewater-Emery High School’s One-Act Play cast and crew presented the play for the community Friday, Jan. 19, and the middle and high school students Tuesday, Jan. 23 in preparation for the region event.

“There are always obstacles, whether it be scheduling issues, dealing with the technical aspects of the production or whatever. I do enjoy seeing the progress made. I hope we have a good showing at the region competition!” Marsh said.

Seven Class B schools including Bridgewater-Emery, Canistota, Centerville, Irene-Wakonda, Lutheran High School of Sioux Falls, Marion and Viborg-Hurley presented plays that are humorous in nature at the Region 1-B One-Act Play Festival.
Each school is allowed a maximum of 45 minutes in which to set up, perform and strike the set. A new rule was added this year that allows a 15-minute prep time where sound and light cues can be checked and actors can walk the stage.

“I love the script. If you know “Hamlet,” you'll appreciate the humor of this version of the story. Even if you're not familiar with “Hamlet,” it should still appeal to you with the actors playing multiple roles and juggling Shakespeare text with modern day text. The action is very physical, with actors running across the stage, tossing a skull in a football scrimmage, etc.  It's also visually appealing with the Elizabethan costumes,” Marsh said.

A panel of three university judges watched the plays, providing a critique of each performance. Two plays from the region will advance to the State Festival at the Brandon Valley Performing Arts Center, Feb. 1-3, 2018.