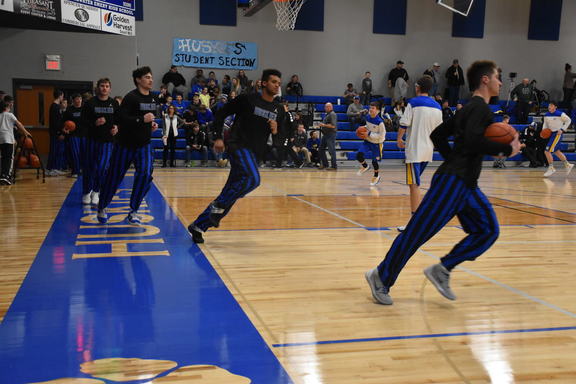 MARCH TO VICTORY: The Bridgewater-Emery boys’ basketball team hustles out to the court before the warm ups of the West Central game Jan. 16. The boys won 68-59, leading up to another win against Howard in Emery Jan. 18.
The Bridgewater-Emery boys’ and girls’ basketball teams had a full week of basketball starting Jan. 15. The girls faced Kimball-White Lake Tuesday while the boys faced West Central at home. Thursday, both the girls and boys faced Howard at home. Saturday, the girls traveled to Tyndall and played Bon Homme while the boys traveled to the Corn Palace and faced Sioux Valley. Before the Thursday game against Howard, the boys’ record was 9-2 and the girls’ record was 4-5.

“You know, I think we just thought that we were going to go out and not have to work hard. We had a mindset that they were an easy team to beat. Because of that mindset, we didn’t come out wanting to work hard,” VanSickle said.

The girls’ varsity was the last game of the night. Eighth-grader Julia Weber jumped and helped the Huskies to get first possession of the ball. Junior Abigal Arend added 19 points along with freshman Kerrigan Schultz with 15 points and five rebounds. Junior Jada Wethor contributed seven points and six rebounds. Julia Weber also added seven points for the Huskies. Junior Tessa Burnham contributed five rebounds for the Huskies. The Huskies had a team total of 23 rounds, seven assists and two steals against the Tigers.

“We had a very strong first half on both sides of the court. Towards the end of the third quarter we started to get tired and Howard did a nice job of capitalizing on our mistakes,” Coach VanLeur said.