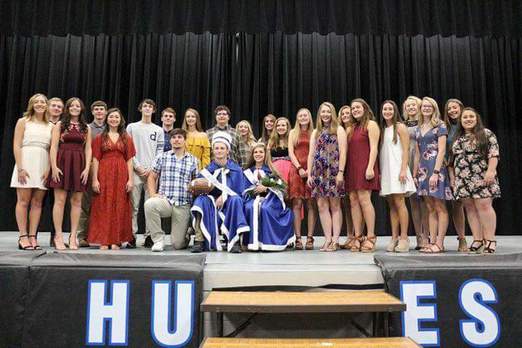 Sawyer Schultz and Joslyn Schrank were crowned as the 2018 Homecoming royalty at coronation ceremonies, Monday, Sept. 17.

​“Receiving homecoming queen was quite an honor for me,” Schrank said. “It made me realize how even just a simple ‘hello’ in the hallway to someone you don’t normally associate with or a simple ‘how are you?’ to someone who looks like they’re having a rough day can really make an impact on people. I’m just so blessed to be surrounded by so many loving, supporting and caring people, not only in our school, but in our community as well.”

“All I have to say is thank you,” Peggy Plagmann said. “I’ve enjoyed watching all you kids grow over the years. I have truly enjoyed it.”

Coronation is not only a time to crown B-E royalty and award Grand Marshal, but also a time to recognize fall sports teams and play B-E Feud.

Throughout the night we recognized the football, cross country and volleyball teams as well as football cheerleaders. B-E students also played B-E Feud. This is a game played in the last few consecutive years, in which two students from each class sit back to back and answer questions about the other students in their class. A question is asked, and each student writes a name down from their class, and if you and your partner wrote down the same name then your class gets the point.

This year, the junior class won the game after four rounds and a tie breaker question.

“B-E Feud was fun this year,” senior Katelyn Kotas said. “I was hoping the seniors could have pulled off the win as it would have been our fourth consecutive win,, but it’s getting time to let other classes have the glory.”

Once coronation was complete and pictures were taken, the two were hauled to the Emery baseball field in the fire truck for the burning of the Flandreau’s “F” to end the night.

Grand Marshals and B-E royalty later then had their own entries in the homecoming parade on the Friday of the game.