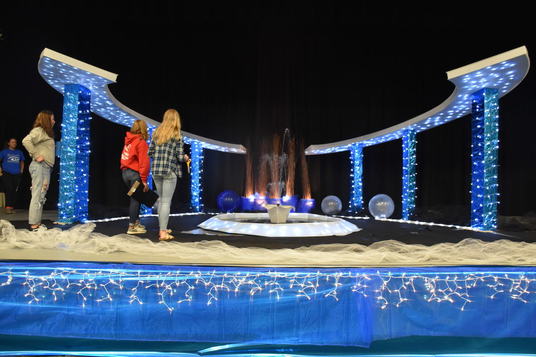 Prom is short for the Old English word “promenade.” This word describes a leisurely walk in public and is what sprang the common word prom. Prom today describes a formal dance at the end of the high school year. The leisurely walk in public refers to the Grand March that marks the beginning of the prom. Bridgewater-Emery held their prom April 6. This would be the first prom in the new B-E gymnasium located in Emery.

The night began with the junior/senior banquet at 6 p.m. This took place in the multipurpose room in Emery. Round tables were set up to promote conversation with other prom couples. The meal consisted of chicken alfredo, salad with croutons and tomatoes (ranch dressing, Thousand Island dressing or French dressing), breadsticks, fruit and mini caramel cheesecakes or plain cheesecakes with berries. This meal was catered by Renee Randall who works for Chef Dominque in Sioux Falls.

Following that, the Grand March began at 8 p.m. in the new gym. This year’s prom theme was “Night of a Thousand Lights.” The décor then consisted of an arch surrounding a decorative fountain. From top to bottom, the stage was covered with white lights to go with the theme. Couple by couple strolled through the décor to show off their formal attire. After the Grand March, class pictures were taken on the stage.

The dance started at 9 p.m. and lasted until 12 a.m. This DJ was different from previous years. This year, the school paid for DJ SieffStyle Entertainment from Sioux Falls. B-E is familiar with this company after attending the bullying assembly in Menno last semester. This company also provided the photo booth, which was set up in the locker room.

“I really liked the DJ this year. He really got us involved during the dance. This was probably my favorite prom of all,” senior Dustin Weber.

After the dance, buses loaded to head to Sky Zone in Sioux Falls to later return around 4:30 a.m. Sky Zone is a giant trampoline park that offers general admission and party reserves. The school paid for the glow jump for the second year. This is where the students wear glow-in-the-dark shirts and jump with the lights off. The trampolines are outlined with a glowing feature to provide light.

“This year’s after-prom was my favorite of all years in the past. Sky Zone had renovated since last year when we went, so there were more things to do. I jumped around for a bit, and then I played dodgeball until it was time to leave,” senior Bradlee Schultz said.

Multiple groups work together to make prom happen and deserve special thanks. Dodi Bailey designed the after-prom t-shirts, parents and fundraisers throughout the year pay for after-prom itself, and the junior class raises money to pay for the dance, décor, banquet and prom favors (white sunglasses). Any junior class money left over carries to their graduation fund the following year.