Bridgewater-Emery FFA Celebrates “I Can. We Will.” 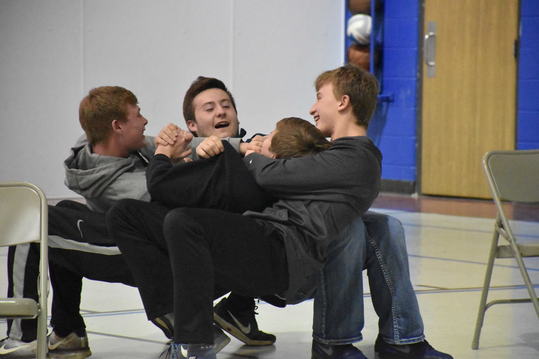 TABLE TOPS: Junior Kinzer Glanzer, sophomore Colby Weber, sophomore Nick Schallenkamp and freshman Brandon Jansen attempt to make a human table. This was a contest during the FFA lock-in Feb. 23-24.
Each year, FFA chapters around the country celebrate National FFA Week. It is a time to share with local, state and national audiences what FFA is and the impact it has on members every day. FFA week this year took place from Monday, Feb. 19 to Friday, Feb. 23.

​Even with the short week due to presidents day being on Monday, FFA members participated in a variety of activities during FFA week including dress-up days, a pancake feed and, new to this year, a CDE lock-in.
Dress up days were Tuesday as favorite farm machinery brand, Wednesday as hat day, Thursday as chapter shirt and Friday as plaid/redneck day.

This year’s national FFA theme “I can. We will.” means something different to every FFA member, and students were asked to share what they thought it meant to them throughout the course of the day during their agriculture classes.

This is the first year that the Bridgewater-Emery FFA has held a lock-in. The lock-in started Friday at 7:30 p.m. Once the clock struck 8 p.m., the doors locked and were not opened again until 9:30 p.m. when the students who attended the girls’ basketball game returned. The doors officially closed for the final time at 10:00 p.m. and no one could leave until 6 a.m. the next morning.

“There was a lot of adapting and changes that had to be made, but overall it was a success,” chapter treasurer Kristin Kotas said.

During the lock-in, FFA members studied and participated in a mock contest for their Career Development Event (CDE), completed service projects including teacher and staff thank you cards and cleaning.
They also played board games, danced, played kickball, made Supervised Agricultural Experience (SAE) fair posters, had a POA report, set up for the pancake feed, watched movies and spent very little time sleeping.

“The lock-in was a lot of fun and [we] got a lot accomplished. I was impressed with everyone and how much work they got done during the lock-in, and all of the effort they put into the pancake feed despite the lock-in being the night before,” chapter advisor Karen Roudabush said.

All of this lead directly into the annual pancake feed that was postponed to the morning of Saturday, Feb. 24 due to the girls’ basketball team advancing to the second round of regions, then the game being postponed due to weather.

“My favorite part was the pancake feed. Even though it was different than usual, I still think there was a pretty good turnout and the dress up days are always fun too,” Kotas said.

FFA week is always a crazy time for any FFA chapter, but this year’s mix of new events, weather and postponements brought about a whole new set of problems that needed to be overcome, but the Bridgewater-Emery pulled through for a successful FFA week.