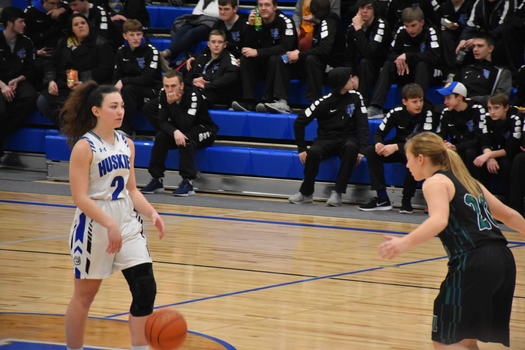 CALLED IT: Junior Abbi Arend dribbles down the court to call the next play against Kimball/White Lake in Emery Jan. 16. The Huskies lost 43-48 in a close game against the Wildkats.
After a busy week for the girls and a slow week for the boys, both teams took to Hanson for a double header Jan. 26.
Boys’ junior varsity started the night. It was a low scoring game for both teams, as the Hanson Beavers pulled off a win at the end with a final score of 29-22. Next, the girls’ junior varsity took the court. Both teams came prepared to fight, but in the end, Hanson girls pulled ahead 42-33.

Then, the boys stepped up again, starting the night for the varsity teams. Going into the game with a 6-7 record, Hanson came out strong, but it was not enough to beat the B-E Huskies that went into the game with a 10-3 record. This game was much closer than expected, as Hanson was ahead in the first half. However, the Huskies stepped up and pulled ahead in the second half to win the game 53-46. Junior Sawyer Schultz had 19 points and eight rebounds for the Huskies, while senior Duot Vansickle had 11 points and nine rebounds. Junior Carter Dye added 10 points and six rebounds.

“We had a slow start and found ourselves in some foul trouble early in the game. I was pleased with the way we regrouped at half-time and played a more solid second half. We were able to get some defensive stops in the fourth quarter and execute our offense in the final four minutes of the game,” Coach Scott Schultz said.

The girls’ varsity finished the night on the Hanson court. The Hanson girls went into the game with a 10-3 record, being seated first in their region. The B-E girls arrived with a 5-7 record, seated as fourth in their region. With the high energy in the gym set by the previous games, the last game began strong. The Hanson girls pulled ahead in the first quarter and continued with the lead, despite the Huskies’ tough defense. Hanson ended up winning the final game with a score of 75-32.

“It was definitely one of our tougher games, and we didn’t go into the game thinking it was going to be easy. We know [how] we need to improve going into the next week,” junior Jada Wethor said.

The next double header will take place at the corn palace against Gregory Feb. 3.