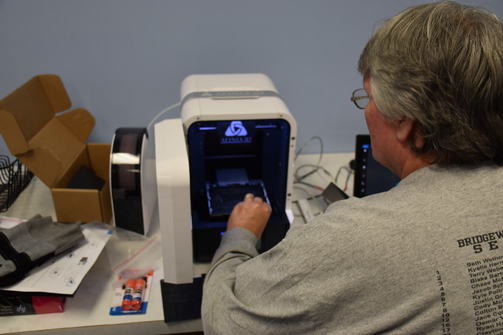 HIGH-TECH: Computer instructor Connie Whistler demonstrates how to use Bridgewater-Emery’s new 3-D printer. This is meant to turn 2-D objects into plastic 3-D objects.
What is a 3D printer. Well you see a 3D printer is the process of making something turn into a 3 dimensional solid with a digital file.

The Bridgewater-Emery school just got a 3D printer this year.

“With the 3D printer we are trying to figure out how it works and basically are still playing with it to get used to it,” Whistler said.

How a 3D printer works is kind of crazy. It lays down layers of material till it creates a solid object. When you are printing the object has to have a plat form to be built on.

“When we were trying to print the objects were not sticking to the platform but we fixed it by putting that purple glue in the stick,” Whistler said.

The 3D printer has been around since 1980 the first 3d printer used stereolithography technique which was created by Charles W. Hull the machine costed $100,000 or more. You probably did not know that they were around in the 1980’s.
A 3D printer can help this society a lot, and it has. If someone who needs a prosthetic leg or arm they can make it out of a 3D printer and it might cost more money but it will be more customized then having to buy one from the doctors.

The world is slowly evolving more advanced with its technology and making everything easier to this society.