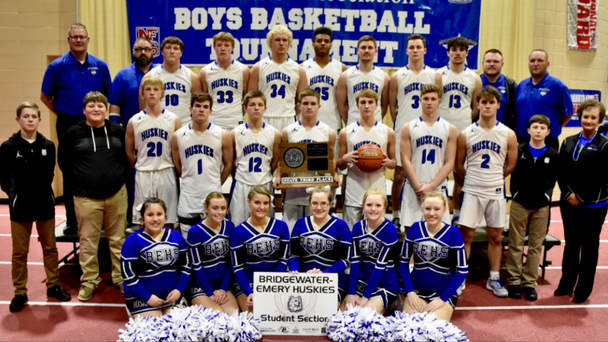 COMBACK KINGS: B-E boys’ basketball players finish third place at the state tournament Mar. 15-17. The boys won against Lower Brule Sioux, lost against Clark/Willow Lake and won in two overtimes in their last game against White River.
Bridgewater-Emery boys’ basketball team had an astounding season once again. The Huskies ended with a 17-3 regular season, defeating Gayville-Volin, Irene-Wakonda and DeSmet in post-session to make their record 20-3 and advancing to the Class B State Tournament in Aberdeen, South Dakota.

​“I was really proud of the boys; we competed hard for three days and left everything we had on the court.  We were disappointed after the semifinal loss to Clark Willow Lake, but the boys bounced back and won a hard fought 3rd place game on Saturday night against a very good White River team.  The boys have a lot to be proud of: losing only one time the last two years to a class B team is quite an accomplishment,” head coach Scott Schultz said.

Thursday, Mar. 15, the Huskies fought for a win against the Lower Brule Sioux. The Huskies fought off the no. 8 seed to move onto the semi-finals. The boys came out with intensity at the beginning of the game which continues until the final buzzer. Stats for the first game included juniors Sawyer Schultz with 20 points and ten rebounds, Carter Dye with 17 points and seven rebounds and Jamin Arend with ten points. Seniors Cole Gassman added 15 points and six rebounds and Duot VanSickle contributed ten rebounds for the Huskie against Lower Brule.

“We knew that even though they were no. 8, we couldn’t underestimate them. We knew if we wanted to beat them, we needed to come ready to play. We started off a little slow, but then we picked it up in the second half. I will definitely miss being out on the court with my brothers,” senior Dustin Weber said.
Friday, the Huskies faced no. 4 seed Clarke/Willow Lake to determine who advanced to the Class B state tournament championship. Unfortunately, the boys were not able to pull off the win, but their effort, dedication and hard work did not go unnoticed. Stats for Friday’s game consisted of juniors Sawyer Schultz with 23 points and 11 rebounds, Carter Dye with 22 points and ten rebounds and Jamin Arend with 11 points.

“They came out ready to play, ready to defeat so they could pursue the championship game, but we wanted it as much as they did. Everything they put up went in the hoop. We continued to shoot but our shots weren’t falling like theirs were. I am proud of the effort that my brothers have put in over the years and in the 2018 state tournament. The last four years were amazing, a great ride with my brothers. I can confidently say that I am and will always be proud to represent the Bridgewater-Emery Huskies,” Gassman said.

The last day at the state tournament, the Huskies faced the White River Tigers to determine third and fourth place. Throughout the first half, the Huskies trailed behind the Tigers. It wasn’t until after half-time that the Huskies came out on top of the Tigers, fighting for the third place title. The two teams took the game into two over-times, but the Huskies pulled far enough ahead of the Tigers. The Huskies came back from a 15-point deficit to obtain the third place title. Stats for the final game included juniors Sawyer Schultz with 38 points and 11 rebounds, Carter Dye with 18 points and 12 rebounds and Jamin Arend with 16 points and 11 rebounds.

“The first half we obviously weren’t ready to play. During half-time, coach gave us a motivational speech at halftime and that gave us some energy coming out of the locker room. That is where the two overtimes came from. We chose to not give up and keep fighting because this was the last game of the season and for us seniors, the last basketball game we will play,” VanSickle said.

The Huskies placed third at the state tournament. The Huskies ended their season with a 22-4 record.